As with many of these tales this story starts with a train journey. A train journey that began and unfolded like many others, except for one uplifting difference.

On most trains in China attendants walk up and down the aisles shouting over the din and clamour of the passengers selling food, drinks and other nick-nacks. From plug-less chargers to holographic posters. From towels to handheld massage machines. From ’kinder-egg-esc toys’ to simple belts. This train was no exception.

However, one attendant had a golden gift. A set of 7 metallic puzzles. We needed a break from our books and thought they might keep us entertained on the journey (and maybe beyond). The going rate was 10 RMB (£1) so we decided – what the hell – let’s splash out.

What ensued was a journey of laughter and camaraderie beyond the bounds of language. As Joyce and I played our carriage-mates gathered round to see what was going on (…no one else had been stupid/ brave/ financially endowed to splurge on little bits of metal). We passed out the puzzles throughout the train and worked them out together! 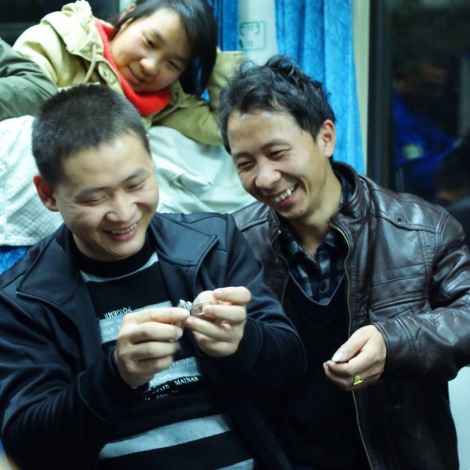 This ignited a flurry of similar purchases by all those who played the game. We were pioneers. We were indirect salesmen. We saw no commission! 😉

But it was all for the moment. It was simple. It was special. It won’t be soon forgotten.

And yet as that train journey ended (and another began) we set our direction away from happy chances to ones that sparked annoyance, anger and just plain confusion…

We were heading to Zhangjiajie national park. Also simply known as Avatar park as the scenery is said to have inspired the setting for James Cameron’s blockbuster film. This may or may not be true, but it is certainly believable when you catch sight of the splinters that soar into the sky.

Anyway, more on that later. First the rants.

At least that ticket will allow you to do everything in the park, right? No. Cable cars. Extra. Elevator. Extra.

Yep. Elevator. We had spent one night outside the park and then decided to venture in and stay at some accommodation atop a ridge line in the park. Big backpacks with us. But no worries… Look the map shows the bus route. Easy. One, maybe two busses…

… Oh. And an elevator. “Well, there was no f’ing mention of that anywhere”.

As we stood looking up at the metal and glass monstrosity pinned to the splendour of natural rock we were faced with turning around (and repeating an already 4 hour plus journey back to the start… More on that later as well) or pay the stupid elevator fee. We felt we had to do the latter.

We did so with sour faces and many complaints about the shortness of the ride, the disappointment of the view and of course, the price.

At the time, it seemed there is nowhere in China you can turn where someone’s proverbial hand isn’t fully outstretched! And to some degree this is true… All the time.

2. Where’s the f**king infrastructure: So, you’re paying a lot of money at a national park that attracts millions of visitors a year, so everything must be well thought out and customer-centric…

… (Sorry, just managed to pick myself up off the floor after laughing too much)…

No chance. An I mentioned, our first night at the park was spent just beyond its boundary line, in a small but well developed village.

Once we had decided to head into the park we headed to the bus station, found the bus to take us to the other entrance (to connect onto a different bus). We took our seat. A couple of people where on and the bus driver looked ready to go.

An hour. One bloody hour we had sat on that bus thinking it will go in a minute. Passing the time absorbed in reading I hadn’t noticed the other people had got off the bus (turns out they were fellow drivers just keeping warm)!

So I asked the bus driver when we go. His reply, “when we have 5 people”.

He could have told us! Anyway.

After much more waiting and running around a bus left and we were underway. When we got to the park entrance we then had to get another bus…

… And get another bus.

Then an elevator (see above).

… And then another bus…

… And then another bus…

And then SHOUT. STOP. That’s our stop.

Finally, we had arrived. Some 5.5 hours after we started. And we had gone maybe 1-2 kms as the crow flies!

How were we going to get out? (how did we get out?) I’m not even going to tell you.

3. Use the sodding door!: This last… Observation, is not a new one. It is something we have seen throughout China, but as I’m on a ’ranting roll’ I thought I might as well include this as well.

Now, in China, many public toilets, both male and female, are composed only of squat toilet with no door. That’s right, no door. You pull down your trousers, squat down and take a number 2 with the world and his wife (well, other blokes or other ladies) looking at you doing your business… In the case of the men they look at you doing your business whilst you have a full frontal view of them doing their own business at the urinals.

Now. I am not here to judge right and wrong and say culturally they may have got slightly off the mark on this one (okay,just discrete judgement then)! I just don’t see the reason. And if anyone can. Please. Pease. Let me know. Comment. Tell me.

Yet. The point I really want to make is this one… There are also many public conveniences with squat toilets WITH doors.

Got that. WITH DOORS.

Now. When the door is there why do people still choose not to use it? Honestly, walking down a row of doors trying to find an empty one and then coming to a gap, an open door, and peering down on a – rather constipated – gentlemen, smoking and straining, is not a way to start any day.

Okay. Sorry about the rants and the interval to the story of the Zhangjiajie national park. Just had to get that off my chest. I feel better already.

Once you get over all the hurdles, Zhangjiajie is a mesmerising place. It is vast. The hills, the mountains, the spires of limestone, the misted valleys, full of pine forests and meandering rivers just go on forever. 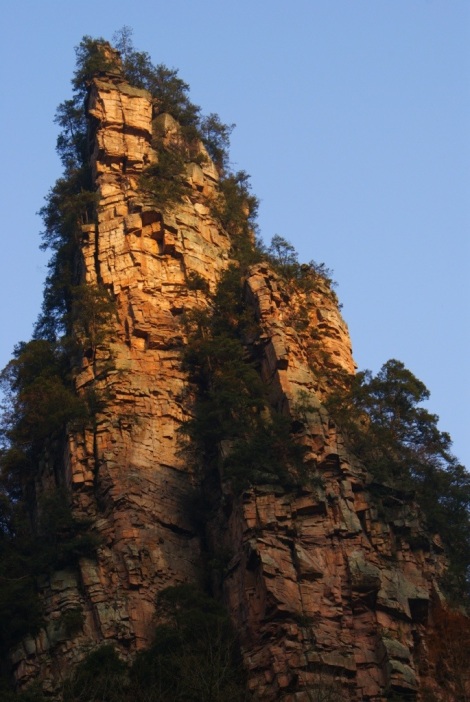 … It is hard to focus on the steps you need to take to keep on the straight and narrow (and literally, the paths are at times very narrow!).

As the sun started its ponderous dip below the spires of stone that had caught our attention for days we sauntered into the backyard of our hostel (literally) and gazed out at a slightly different, but no less dramatic, sight. A stone bridge suspended over the pine forest below. 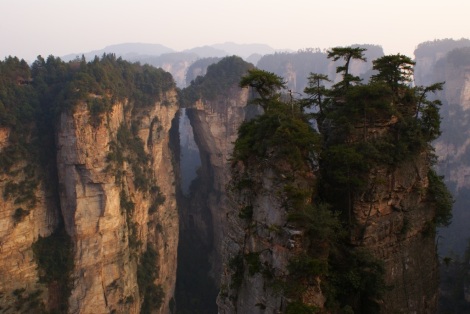 And we watched as the light danced over the stones, as it does every day, before the chill cut through our clothes and we turned back to the hostel for one last sleep.

And then we journeyed out. A journey I will not tell you about. If you’re not sure what it was like, just look above. It’s pretty similar.

But don’t worry. I won’t leave you with nothing. Look. A monkey! 🙂

2 responses to “Riddles, rants and rapture”