Makassar. Capital of Sulawesi. We left before we began.

After a mere 24 hours in the city – most spent in bewilderment as our minds were cast back to ‘the horror, the horror’ that was Pelni Wilis.

We sorted our transport out of the city, ate some mediocre food followed by some pretty atrocious squid, and wrapped it all up with a lack lustre visit to Fort Rotterdam.

All in all, not much to tell before we were back on Indonesian public transport. Yeah! Although we would have to endure almost 12 hours on a bus, it was air conditioned and incredibly comfortable… It was the antithesis of ‘the Wilis’. 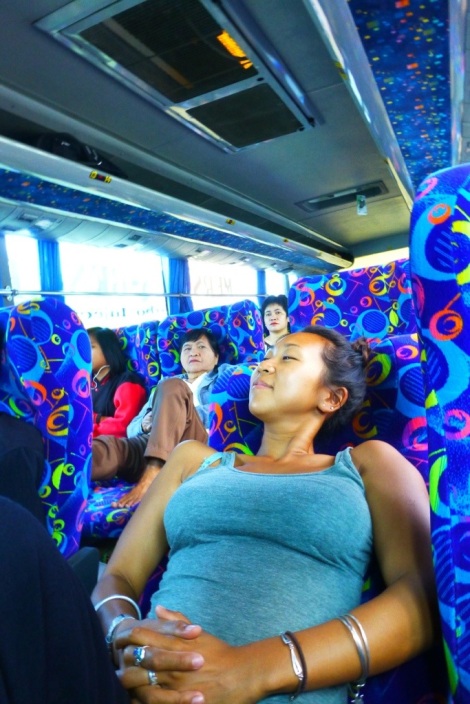 We were heading north to the Mountain kingdom of Tanah Toraja, where its people still held to traditional and obscure beliefs.

The journey to Tanah foretold why these beliefs had lived on so long. For centuries it was an isolated sanctuary. The mists that curled around its mountains shrouded the bloody beliefs concealed within.

Limestone karsts and peaks shot skyward, rivers and waterfalls crashed with water, impenetrable jungle enveloped us… And death screams echoed across the valleys. Stopping us cold in our step.

This was Tanah Toraja. A land of bizarre and mixed beliefs (they are now Christian as well as holding to their ancient and animist beliefs) that revolve – not so much around life – as they do around death. The funeral is the most important ritual and ceremony in their calendar. One they hold to reverently. 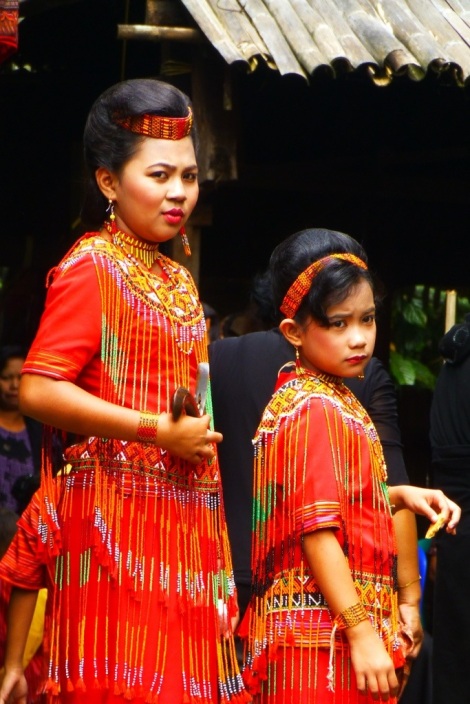 We were fortunate enough to be welcomed to day one of a funeral ceremony. Ceremonies last four-five days; each day bringing a new element to the proceedings.

We were not the only tourists; all-in-all we numbered perhaps ten, out of a funeral that numbered in the two-to-three hundreds. It is a strange feeling – for a westerner – to be welcomed to the funeral of someone you have never met. But for the Torajan people it is a sign of status. The more people at the funeral, the more animals you are offered and you kill (we’ll come onto this) the higher your place in society.

We were welcomed most warmly, our gift of cigarettes was appreciated, we were fed snacks and lunch and many cups of coffee. We sat in our stall and looked out onto the scene before us, we mingled with the other guests, we chatted. 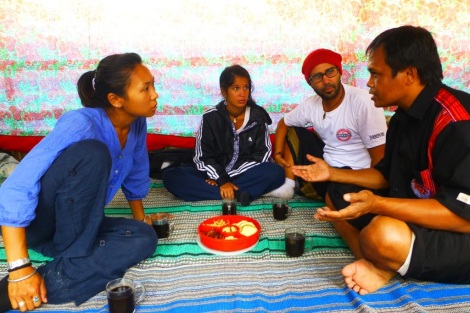 And then, the main event of day one began. A water buffalo in its prime – strong flanks, piercing glare, sure-footed step – was led into the centre of the congregation. It was tied simply, yet securely, to wooden stakes, and its front legs were bound. We sipped on Balock (palm wine).

A scream. We glanced up to see the buffalo rear its head in anguish, blood spraying widely and wildly from the large gash in its neck; the blood obscuring the man, the knife, that did the deed. 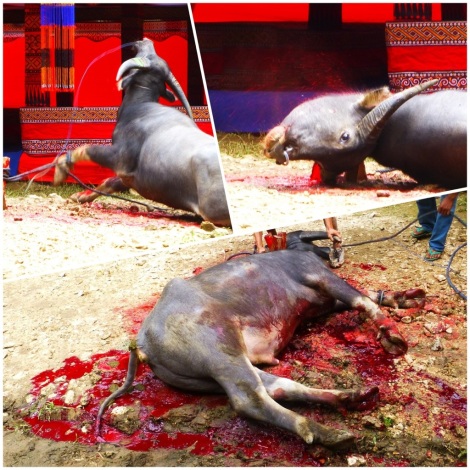 We had missed the cut, but the death throes that ensued were plain for all to see. I do not believe the animal suffered. The cut was clean and deep. It was a humane death, given the traditional method employed.

And what followed was a most exquisite, if somewhat macabre, display of skill. The animal was deftly skinned – the hide to be used for cloth – and cut into portions. The meat would provide the sustenance for the evening meal.

We also witnessed the slaughter of pigs, performed with equal skill and for the purpose of food for the multitude of guests that continued to arrive. It was an eye opening experience – to be close to death in so many ways, to see the skill of these people and to be welcomed so warmly to such a personal affair.

Joyce and I were also narcissistically interested in how we would feel witnessing the slaughter of an animal. We are keen cooks and meat eaters and have long believed that you should be willing to kill what you eat, to witness the death of an animal that will provide you with life. Watching this feat has reinforced this belief. We did not baulk. We were only intrigued and fascinated by the skill of the butchers.

Leaving the ceremony behind we were to see – to understand – more of the Torajan beliefs, which meant that death would continue to shadow our steps. This we could not escape.

Graves – ingenious in conception – were the order of the day (cremation is not allowed in Torajan society. The body must be preserved to allow a physical point for the spirit to return to… if it so desires). Hanging graves. Stone graves. Baby graves. We visited them all.

Hanging graves: Torajans don’t believe in burial beneath soil and dirt – the land must be kept pure – so high on rafters coffins lurch and lean over the living below.

Stone graves: Hammer and chisel created them – straight and true their depth cuts into the cliff. Their existence ensured for centuries. 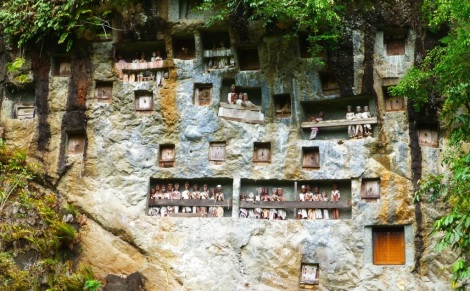 Baby graves: If one was lost so young (before teeth appeared) a hollow, running vertically inside the tree, would be cut. The infant placed in upright, so with the tree, the baby would grow.

And finally, tau tau. These figurines, carved from Jackfruit wood, are statues of the deceased. Their hands held upwards in placation, to show, in death, that they have nothing more to give. 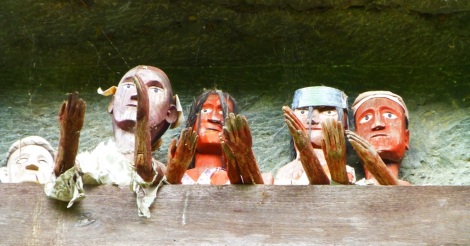 And now I have little more to give.

The torajan culture is fascinating, and after so little time we have not even ‘barely scratched the surface’. Whilst funeral rites and sacrifices play a central role, it is a culture with more nuances and depth than I was able to experience. 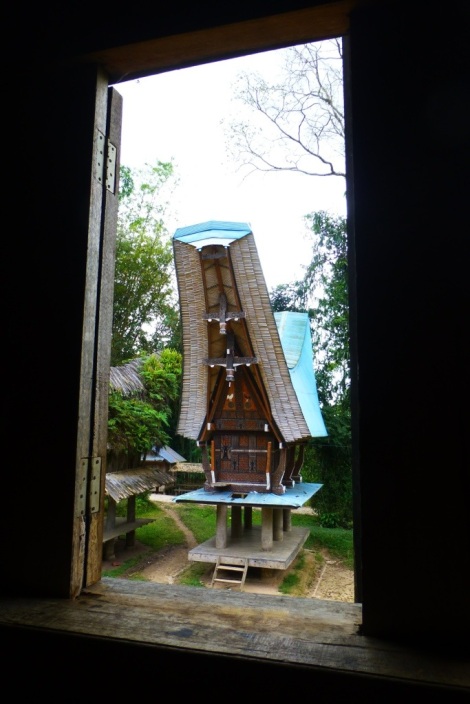 … Some of the most unusual and stunning architecture I have seen, not only in Asia but in the world. Why do their roofs bow and point to the heavens so elegantly?

The answer is strikingly simple, poetic and practical. When the Torajan ancestors arrived they used their boats as roofs. Their architecture continues to emulate this and tell their history.

We would love to stay and learn more about this one-of-a-kind culture but our time on this land is ticking away (and travel is hard… & long in Sulawesi).

So we must be away. Or be lost here forever.

2 responses to “Beliefs, blood, balock and a buffalo”