Crash back from the club. Three-something in the morning.

Bed. Who knows what time.

Up again to leave Kuta. Five-something in the morning. Ouch!

We were shadows of our former selves. Empty vessels. Zombies. But we had arrived at the Gilis. A place where time stands still and you drift through the days aimlessly. White coral sand beaches enrobe the three emerald gems – Trawangan, Meno and Air – that sit off the north-west coast of Lombok. Boats line the shore and glint in the endless southern-sun. Waves spill indiscriminately on bows and beaches alike.

Turning inland, coconut trees shoot star-ward whilst ramshackle huts creep tentatively out of the forest. Animals abound; the cockerel’s call carries on the wind without fail, the chime of cattle bells drift with them and the clatter of horses hoofs call to you to rest those wearing-walking-legs… There is no motorised transport on the Gilis. 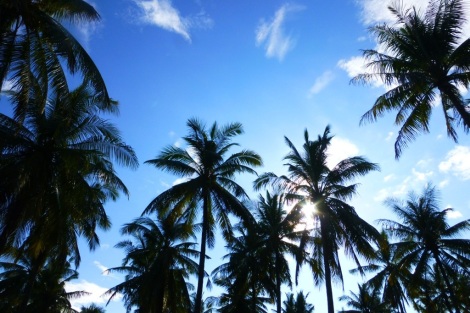 Whilst this might sound ridiculous, our visit to the Gilis was a little holiday from travelling. I am sure I do not need to convince anyone who has travelled long term how draining, exhausting and tiring travelling can be. Don’t get me wrong travelling is amazing: the rewards finding no equal in the cons; however, sometimes you just need a break.

And for four days we had one.

We drifted delightfully from sand to sea; from bar to beach; from restaurant to reef. And many other combinations of sea, sun and sand. It was bliss.

The most adventurous we became was venturing out from shore and under the waves to experience the Gilis from another perspective.

The diving was great. If only because, after 30 dives we finally met with a turtle! And not just one. Three. Two greenbacks and one hawksbill. They were as graceful as you expect. Simply, gliding through the water serenely or perching on coral peacefully.

We saw many other things as well. Including a black tip reef shark. Equally breathtaking.

But whilst the marine life was abundant it was sad to see how much the coral around these beautiful islands has suffered. The fishermen here historically used dynamite to catch their fill and this has had devastating consequences on the underwater flora. Whilst the practice stopped many years ago the coral life is still low and growth is slow. I wish it a speedy recovery, as diving in the Gilis should get better-and-better year-after-year

I also tried my hand at Qigong – an ancient Chinese practice of aligning breath, movement, and awareness for exercise, healing, and meditation – at a small retreat on Gili Air (H2O Yoga). It was certainly relaxing.

But other than that… And I realise ‘that’ is not a lot. We chilled. We ate well. We drank well. And with good friends – hey Britney. Timm. As well as some interesting conversation with many other holiday makers… Who may, or may not, have been extremely high on shrooms! Extremely high!

And whilst the sun goes down on our ‘holiday’ our adventures are far from over. And so, once again refreshed, we head out into the great unknown…

4 responses to “The Gilis. Time for a holiday!”